This lesson tells us about leadership. How to become great leader. Greatness is not measured by our rank or possessions but by influence we have on others to become better through our serving them. We don't lead just by giving commands. We lead by serving them to show them the way, give them the motivation and help them to do and become better in their calling of lives or roles in the organization. Serving is a more effective way of leading than just commanding, or by incentives and punishment.

Continued from Kingdom Principles Discussion 08 Law of Reciprocation, we discuss about the Law of Greatness - Servant Leadership. Unlike the worldly system when those in higher positions are served by those in lower positions, in the Kingdom of God, the leader serves his followers. Greatness is measured by the influence one has through one's serving of others.

Worldly system tells us to give commands, have an incentives and a punishment system. The Bible tells us a better way to lead. It is by serving them to show them the right way to do things. It is clearer than just giving commands. It is more engaging and motivating than incentives/punishments because it is about intrinsic motivations rather than extrinsic.

Jesus as God set the Example - To Die for Man
The example is set by Jesus as in Phi 2:1-11 Though Jesus is God yet he became a man just to suffer and die on the cross that men may be saved and become children of God.

The Lesson from Washing Feet John 13
When none of His disciples were willing to wash one another feet (a task for the servant) , Jesus set the example by washing his disciples feet and giving the teaching of John 13:14 "If I then, your Lord and Teacher, have washed your feet, you also ought to wash one another's feet" an powerful object lesson. When He came to Peter, Peter refused Jesus. Peter did not understand the principle that Jesus was trying to teach. Peter was still stuck in his own worldly standard for the low shall serve the higher. Jesus was very clear that if Peter did not accept His Kingdom Laws of leading by serving, then Peter should have no part in His Kingdom. Peter then went overboard by asking Jesus to wash him totally. He still seemed to miss the point. It is not about washing per se, but about serving others to ensure the shared mission is accomplished. Task has no ranks, only good and evil. If there be a needful task, then anyone able should do it irrespective of one's rank (King or slave).

Here is the mind-map that summarize the meaning of Servant Leadership: 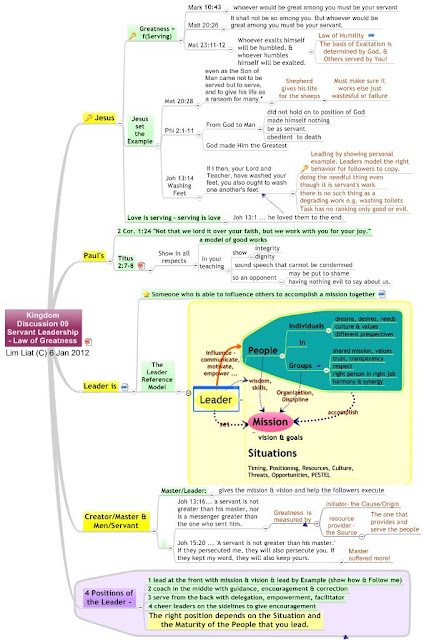 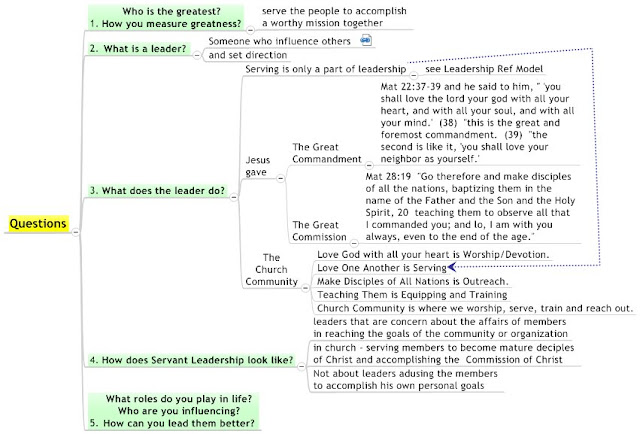 Next :Kingdom Discussion 10 Perseverance to Mission & Values
Posted by Lim Liat at 7:23 pm