Golden Nuggets for A Diamond Marriage

Some guidelines for a happy and life long marriage.

Over the years, we are blessed with the opportunities to meet up with young couples, going through pre-marital counselling and solemnizing their marriages. We also have done marriage and parent-children counselling. Now and then, there may be the need to give a quick advice for a happy marriage. I have many notes and some good books on such topic.

This morning I  challenged myself to write down from memory, what are the advice that I would give to newly married couple, thinking that the keys things will be remembered. I do a draft mind-map first and then check up with some of my notes to come out with a more complete set of guidelines. So below the final map and I hope it is still short enough to commit to our memory. It is then easier for us to put them into practice and reap the benefits of a happy marriage that last for a life time. 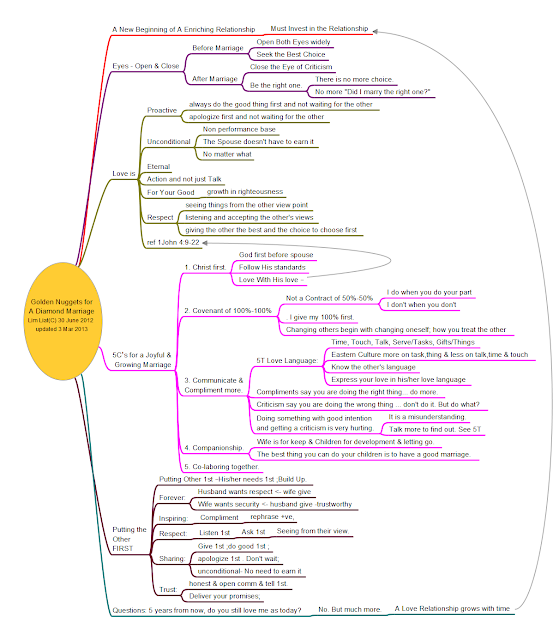 Relationship with in-laws is a very important and yet a very delicate issue that must be handled with great care. The best advice we give to newly weds is to have the blood-line doing the talking. Hence, the husband or wife will always be the nice guy to the in-laws. If there be any sensitive issue, the husband or the wife will speak to his or her respective parents. Let the difficult issues be settled between the son or daughter and his or her parents.

Be not shocked or saddened by events that a pastor could be accused of misuse of church funds but to reflect and learn from it so that such events can be prevented. It is a wake-up for the church members and board members to be clear minded and really help their pastors rather than be accomplices to their downfall.

The headline news for many newspapers and Facebook posts is the arrest of City Harvest Church's (one of Singapore mega-churches) senior pastor Hong Kee and his associates for alleged misuse of church funds. It is better to get the official background and the story from the Commission of Charity(COC) in Inquiry found misconduct and mismanagement in the City Harvest Church. A story of the arrest can be found in City Harvest founder Kong Hee arrested for alleged misuse of church funds.

Firstly, the issue is not new. Way back in May 2010, the COC announced the engagement of CAD(Commercial Affairs Department) into the investigations of possible misuse of funds. It took two years of work before the formal charge and arrest were made. Since it was quiet for two years, I initially thought that the investigation did not reveal anything serious and the matters had been settled and put out of court. But the charge showed that the case was in fact very serious and complex that it had taken so long. The amount involved was relatively large, S$23M, and the alleged misconduct seemed quite complex as disclosed in the COC's statement.

Secondly, the misuse of funds is not the first case in a church. It happened to Church type organizations all over the world and it also happened to other religious organizations even in Singapore as well. Celebrity status Pastors, Leaders, Sports Persons and Stars getting into trouble are well known. It shows that no matter how great a person can be, man is still not perfect and he succumbs to temptations. The saying that 'power corrupts and absolute power corrupts absolutely' does have a lot of supportive evidence.

Even God's Anointed Man is still the Man with Weaknesses
Having it happen to the God's anointed pastor makes it more newsworthy and heartbreaking for many. 'Man has weaknesses' is the polite way of saying. In religious circles, we call the weaknesses sins.

My Wise Pastor
In my younger days, I followed a Pastor who just started a church. He invited me to be on his board of elders. I told him I would support him always after all we saw him as our spiritual leader. But he told me that he wanted a board to oversee him; to give a check and balance and to keep him wise and honest. He will consult the board, us, on major decisions and purchases. The church that he started grows to be one of the mega churches in Singapore.

The Prevention, Especially for God's Anointed, is Check & Balance Accountability
The way to prevent, especially the God's anointed man or woman, is to establish a system of check and balance accountability. Why do I say 'especially for the God's anointed'? Here are the reasons:
Does the Church need a New System?
The answer for the Singapore case is really no. The COC has set up many guidelines to ensure the proper running of Charities with many checks and balances. It calls for the members of the Church, or other Religious Organizations, to be educated with purpose and the guidelines and to ensure its adherence of their members, boards, pastors, and elders.

For the spiritual leaders, the pastors and elders, maybe they can form an accountability group to check and balance each other. The older and more senior retired pastors and elders should be invited to sit in those accountability groups. The business leaders should be included in the group as well. Too spiritual elders like to say that the church should not run like a business organization. But the truth is that there is no such thing as spiritual or secular jobs. See Christianity Rediscovered: Secular vs Spiritual Jobs. The standards for listed companies are more stringent than the religious societies.  We cannot hide under the Name of God and be negligent in our upholding of integrity and other Biblical virtues, teachings, and practices.

In The Mean Time:
This is still a trial and there is no conviction yet. We prayed for those who are involved, and their family too. It is very tough on the people and their family to be involved in any court case especially such a one that draws so much publicity. We prayed that God presides over the whole event, protects and vindicates the innocence and give grace and peace to all. We all made mistakes and give in to temptations that is why we need a savior Jesus Christ to save us and change us.

Next: Reflections on the Reactions to Kong Hee Alleged Misuse of Funds - 1