The Righteous - Wisdom from Proverbs

In the post A Taxonomy for Proverbs I try to regroup and classify proverbs verses according to the main topics instead of by chapters. I have done that for 'Fool' and this time I look at "Righteousness" or more precisely, the 'Righteous' people. What do righteous people think, behave and more importantly what happen to them in the end? The answers are all provided in the Proverbs. Proverbs chapters 11 to 13 cover a major portion on righteousness. But there are more in other chapters. Lets find out.

Here is an outline in mind map format: 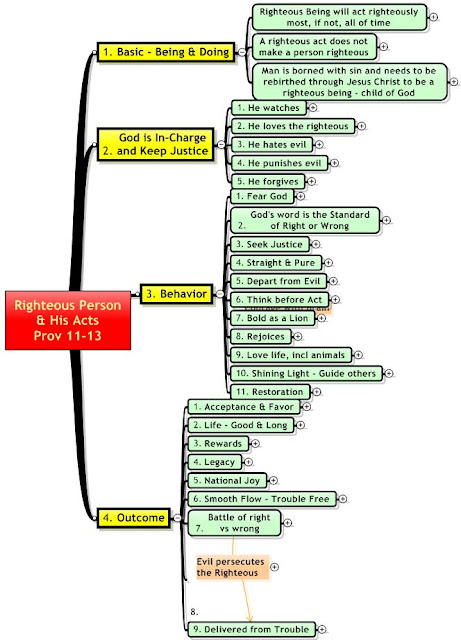 1. Basic - Being & Doing
Let me begin with a fundamental concept of "Being vs Doing". Being is of the nature and doing is the action. They are not the same. Man is a human being. Bird is a bird-being. Man can sing like a bird. Some birds can speak like a man. But singing like a bird does not make man a bird neither does a speaking bird make the bird a man.  Man is born with a nature of sin and is separated from God. Man having a sin nature does not means man is incapable for good. On the contrary, man is created in the image of God, and hence have much greater capacity to be good than evil. We have a conscience that condemns us when we sin. Nevertheless, the sin nature gives us a propensity to sin whenever there is opportunity especially when no one is watching or the probability for being caught is little. God has provided a way for us to be transformed and rebirth into the new life of God. Here is mind map that summarized this paragraph:

2. God is In-Charge and Keeping Justice
As believers, we must strongly believe that "God is In-Charge and Keeping Justice". We are told not to take revenge into our own hands. We are commanded to love our enemy(Rom 12:19)! How could this be possible unless we believe God is in-charge and will vindicate and uphold justices for us. "It is mine to avenge; I will repay. In due time ..." (Deuteronomy 32:35).  Prov 29:16 even assures us that we shall see the downfall of the wicked. Here is the summary:

3 The Behavior of the Righteous
The Righteous begins with a 'Fear of God'. The righteous believes in a God of creation, a God of love and order, and a God that watches over us (see last paragraph). The standards of Right and Wrong should be defined by God who created us and not by us the created. The righteous shall seek wisdom and obey God. Here are more things that the righteous do and the corresponding verses: 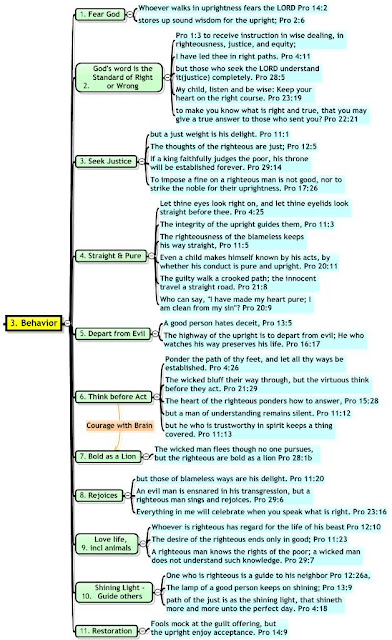 4. The Outcome of the Righteous
Upset by the apparent successes of the people who practices the short-cut seemingly worldly smartness? Wondering what happen to the God of Justice? Habakkuk was such a prophet. You can read his book. Proverbs here have a longer list of rewards and blessings. Righteousness is supposed to provide a smooth sailing in life. But in the world with the presence of evil, there is a battle of good vs evil. The righteous will at times be persecuted by the evil. But the Lord promises that the righteous will be delivered and protected and live to watch the destruction of the evils. The Righteous are promised a legacies that benefits their future generations. Below is the long list of blessings: 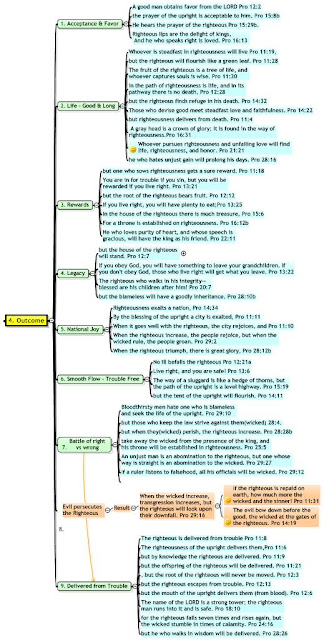 Hope you are encouraged and continue in your work of righteousness. Trust in the Lord and He promise that He is coming quickly with His rewards. May God bless you and deliver you. Amen.

36 Strategies and the Bible

After a study on Sun Zi Art of War, the natural follow-up is the study of the 36 Strategies. However, I have always considered the 36-Strategies, some say 36-Tactics, as a bag of dirty tricks that any good Christian should not waste their time on. (note: On deeper study, it is not and we can learn much from it).

However, if you are ever in counseling or are trying to correct a bad behavior of a friend, my previous direct approach of telling the truth does not lead to a good result. At best, it encounters a defensive wall and at worse, it changes a friend to an enemy! The direct, frank approach of good intention seldom achieves the desired change and frequently ends badly. The approach used should be dependent on the person receiving the input and the situation. Truth, while right, could hurt and hence it needs to be packaged properly. Paul specifically pointed out in Eph 4:15  'But speaking the truth in love, may grow up into him in all things ...'. The truth, in order to be received well, must be packaged in love. The hardness(yang) of truth must be covered on the outside with the softness(yin) of love. Otherwise, it will be too hurting.


Putting the hard(yang) within the soft(yin) is one of the main principle of 36-Strategies. (note: there are other principles as well)


Nathan & David
The Bible provides a good example of a 36-Strategies. King David committed grave sins of having adultery with Bathsheba and the murdering of her loyal husband. Who dares to confront the King and point out his sins? Even so, will the King repent or will he argue that he had the right to do as he pleased? Nathan instead told the King a story of a rich man taking away and killing the lamb of a poor farmer to feed his friend. Nathan asked David what should be done to the rich man? Then he pointed out that David was the rich man. This led David to discover for himself his horrible deeds (2Sa 12:1-7). Can you tell me which of the 36-Strategies that Nathan used? I think it is #26 指桑骂槐 Point at Mulberry but scold the Sophora Tree.

Is Strategies Morally Neutral?
On deeper thought then, strategies are like money, they are morally neutral and powerful. It is the use of it for good or bad, by the person that determine its right or wrong.

e.g. 'Strategy #05 趁火打窃 Looting when there is a fire' teaches us to exploit the opportunity. Even though the pictorial description uses it in a bad sense of looting, we can also see it as an opportunity to do good. The Japan March 11 9.0 Earthquake is a great opportunity to show love and give help to the Japanese. It is up to us to make good or bad use of the opportunity. This is also where a Christian can make a difference. When worldly wisdom teaches us to loot, Christians make a difference by doing the opposite, going there to give and to help.

May God give us wisdom and ability to extend His kingdom on earth.

Similar Verses in Bible and Chinese Classics 10 on Filial Piety

After I became a Christian, I tried to witness to my dad. I was trying to show him that Christianity is not a western religion. Rather, the Bible teaching is very similar to Chinese teaching. I cited the 4th(4th for the Catholic, 5th for the Protestants) commandment of the famous Ten Commandment, which is Exo 20:12 Honor your father and your mother, so that your days may be long in the land that the Lord your God is giving you. In the Chinese Classics teaching of the Ru Jia, Confucius School, this is known as Xiao 孝 translated as Filial Piety.

In my study of the original 'Bible on Filial Piety', see Understanding the Bible of Filial Piety (Xiao Jing) in One Minute, I discovered that Xiao is not just one-way of children honoring their parents but also of parents loving their children. It extends beyond the relationship between parent and children, but to friends and to the kings and its subjects. Filial Piety is best, in the original Chinese Classic teaching, to translated as "Love and Respect". It teaches that the Elder should love the younger and at the same time, the younger should respect the elder. The teaching of Filial Piety has been distorted over time just as the Bible has been. Xiao, according to Confucius, is the basis of all virtue. It begins at home with the Elders loving and the Younger respecting.

This duality matches well with Paul's teaching in Eph 6:1-4:

1Children, obey your parents in the Lord: for this is right. 2Honour thy father and mother; which is the first commandment with promise; 3That it may be well with thee, and thou mayest live long on the earth.
4And, ye fathers, provoke not your children to wrath: but bring them up in the nurture and admonition of the Lord.

Much has been said about Children obeying and honoring their parents. But in Confucius teaching, honoring involves taking good care of oneself, be faithful in work, excel and do well in life, leaving a legacy that brings glory to their parents. It also involves not showing angry faces at our parents or any act that may embarrass them. It involves taking good them of them when alive and giving them a good funeral when they die. It does not, as have been frequently misunderstood, that we must obey all the commands of our parents. It involves ensuring that our parents live the righteous life and if need be advises them. We must as children ensure our parent live rightly and well.

There is much less teaching on "Fathers provoke not your children". "Provoke" and "Nurture" come in the same verse and should be related together. To nurture our children well, we must not provoke them with our so called 'nurturing'. Let me quote a paragraph from my post Walk in the New Life Part 3 Roles.


The right way to bring up Children is given in 6:4, not provoke them to wrath (to anger and then rebellion later), but in nurturing and admonition of the Lord.

There are two points:
How do parents provoke their children?

Here are a few examples:

There is similar verse in Col 3:21

(ESV)  Fathers, do not provoke your children, lest they become discouraged.

The KJV version added anger which is not in the original manuscript. In this case, the provocation results in discouragement. How it is done? A modern Chinese Translation put it better as:

You fathers, do not keep nagging, finding faults and scolding your children, making them upset, so that they may not be discouraged.

So we can add the following to the list of DO NOT:
Lim Liat copyrighted Apr 2011/12

For more, see Chinese Classics & The Bible
Posted by Lim Liat at 3:30 pm No comments: