In Romans 11, Paul emphasized that God has never forgotten nor rejected his fellow Jews. Salvation is based solely on faith and not on work, no matter Jews or Gentiles. The salvation of the Gentiles will awake the Jews. Christ will come again and will unit all people unto Him. In the Parable of the Banquet, the original invited guests did not come, and the invitations went to the others. In this sequel, the original guests was given another invitation, and they show up. The first becomes last and the last become first. It is not by work but by faith in the grace of God.

Many successful and famous people have said that success is a poor teacher. It does not teach us much. It even leads us to have a distorted view of reality causing us to think so highly of ourselves and wrong attributed the gifts and contributions of others as our own ability. In the Bible record, God first revealed Himself to Abraham and later to Moses, God gave his Laws. The Jews were the first choice of God to show His love to others and to attract the Gentiles to come to know Him through them. But given so much revelations, they, as typical of all man, of Adam, think that they could achieve justification by themselves. They said to Moses, "Just tell us God's laws and we will obey them". Such confidence has led them reject God's grace. On the other hand, to those, the Gentiles, that have not heard of God Laws, gladly received the grace of salvation of Jesus Christ. It is so ironical that the first became last and the last become first. This was illustrated with the Parable of the Banquet and the story of the Rich Young Ruler in Matthew 20:16 and 19:30.

In the final analysis, it is not whether first or last, but rather, just be saved. God will not forget his covenant with the Jews but His basis of salvation changes not, by faith, no matter what races. Paul has addressed this at the start of Romans 2:29  "But a Jew is one inwardly, and circumcision is a matter of the heart, by the Spirit, not by the letter. His praise is not from man but from God. " and in Col 2:11 to the Gentiles: " In him also you were circumcised with a circumcision made without hands, by putting off the body of the flesh, by the circumcision of Christ, "

Here is the summary of Romans 11 in mind-map form: 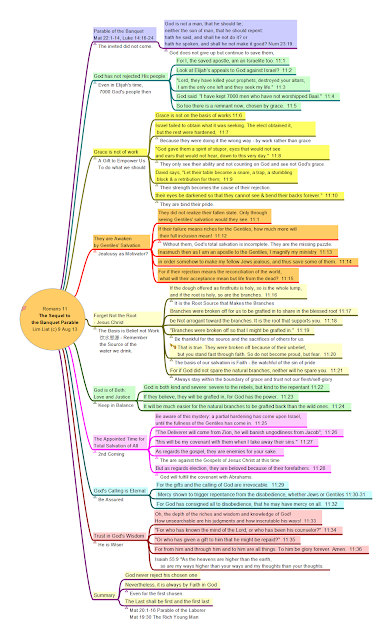