Does not salvation by faith gives us the license to sin? If our sin reveals God's goodness, then why should we be punished for our sin? Paul addresses such questions in Romans 3. His conclusion is "Faith upholds the Law" and hence if you truly understand and have the faith in Jesus, then you have fulfilled and will continue to uphold the Law.

note: the bible verses are my own. Please read the original translations if you have any doubt. 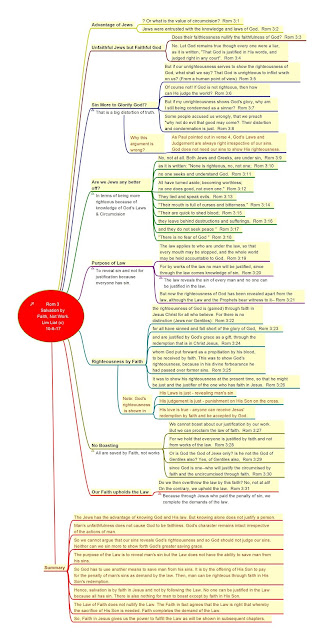 The advantage of Jews
Or what is the value of circumcision? Rom 3:1
Jews were entrusted with the knowledge and laws of God. Rom 3:2

Unfaithful Jews but Faithful God
Does their faithlessness nullify the faithfulness of God? Rom 3:3
No. Let God remains true though everyone was a liar, as it is written, "That God is justified in His words, and judged right in any court". Rom 3:4

Sin More to Glorify God!?That is a big distortion of the truth.
But if our unrighteousness serves to show the righteousness of God, what shall we say? That God is unrighteous to inflict wrath on us? (From a human point of view) Rom 3:5
Of course not! If God is not righteous, then how can He judge the world? Rom 3:6
But if my unrighteousness shows God's glory, why am I still being condemned as a sinner? Rom 3:7
Some people accused us wrongly, that we preach "why not do evil that good may come?. Their distortion and condemnation are just. Rom 3:8

Why this argument is wrong?As Paul pointed out in verse 4, God's Laws and Judgement are always right irrespective of our sins. God does not need our sins to show His righteousness.

Are we Jews any better off?In terms of being more righteous because of knowledge of God's Laws & Circumcision
No, not at all. Both Jews and Greeks, are under sin, Rom 3:9
as it is written: "None is righteous, no, not one; Rom 3:10
no one seeks and understands God. Rom 3:11
All have turned aside; becoming worthless; no one does good, not even one." Rom 3:12
They lied and speak evils. Rom 3:13
"Their mouth is full of curses and bitterness." Rom 3:14
"They are quick to shed blood; Rom 3:15
they leave behind destructions and sufferings, Rom 3:16
and they do not seek peace " Rom 3:17
"There is no fear of God " Rom 3:18

Purpose of LawTo reveal sin and not for justification because everyone has sinned.
The law applies to who are under the law, so that every mouth may be stopped, and the whole world may be held accountable to God. Rom 3:19
For by works of the law no man will be justified since through the law comes knowledge of sin. Rom 3:20The law reveals the sin of every man and no one can be justified in the law.
But now the righteousness of God has been revealed apart from the law, although the Law and the Prophets bear witness to it-- Rom 3:21

Righteousness by Faith
The righteousness of God is (gained) through faith in Jesus Christ for all who believe. For there is no distinction (Jews nor Gentiles): Rom 3:22
for all have sinned and fall short of the glory of God, Rom 3:23
and are justified by God's grace as a gift, through the redemption that is in Christ Jesus, Rom 3:24
whom God put forward as a propitiation by his blood, to be received by faith. This was to show God's righteousness because in his divine forbearance he had passed over former sins. Rom 3:25
It was to show his righteousness at the present time so that he might be just and the justifier of the one who has faith in Jesus. Rom 3:26Note: God's righteousness is shown in His Laws is just - revealing man's sin
His judgment is just - punishment on His Son on the cross.
His love is true - anyone can receive Jesus' redemption by faith and be accepted by God.

No BoastingAll are saved by Faith, not works
We cannot boast about our justification by our work. But we can proclaim the law of faith. Rom 3:27
For we hold that everyone is justified by faith and not from works of the law. Rom 3:28
Or is God the God of Jews only? Is he not the God of Gentiles also? Yes, of Gentiles also, Rom 3:29
since God is one--who will justify the circumcised by faith and the uncircumcised through faith. Rom 3:30

Our Faith upholds the LawDo we then overthrow the law by this faith? No, not at all! On the contrary, we uphold the law. Rom 3:31Because through Jesus who paid the penalty of sin, we complete the demands of the law.