Justification is by Faith as Shown by Abraham - Romans 4

Religions go by justification by the works of the Laws. But Christianity is justification by faith in Christ and not works. This is shown in the example of Abraham. He was counted as righteous because he believed in the promise of God and acted accordingly. The promise and acceptance by God occurred before the giving of the Laws and circumcision. The circumcision was a later sign of earlier inward faith in God. This justification by faith in Jesus Christ is available to anyone who believes. Adam sinned by not believing God and Abraham was justified by believing in God. That is right isn't it? 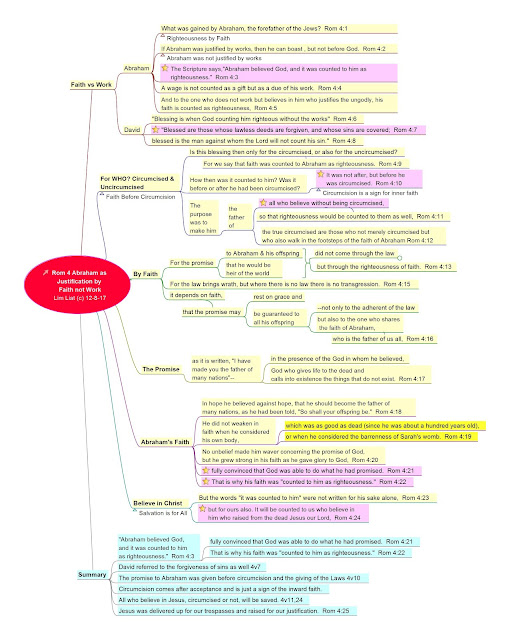 Back to the Original Sin of Adam:

Eve sinned by believing the Devil rather than God. She used her senses to see that it was good for food and pleasant and chose to believe what the devil had said about making one wiser and so she ate and gave to her Adam who also ate without asking. Since it was unbelief that caused the first sin, it makes sense that God now enables us to be saved, a second chance, by believing in the redemption of Jesus Christ. God is reconciling us back to him through a relationship of trust and obedience.

See also The Branding of Believers - The Ten Commandments