Wisdom of Proverbs - Cause and Effect

Bible and the Chinese culture teach us that the law of cause and effect works. You reap what you sow. Melons for melon and beans for bean. But some ultra-grace believers think that God's grace remove the consequences from your bad actions. God does not violate his own words. Removing the consequences only produce spoiled brats and socially unfit weirdos. Let the consequences be the teachers. The best you can do is foretell and may be minimize the impact with your support to help through the consequences.

In Christianity Rediscovered: A Taxonomy for Proverbs, I try to categorize the wisdom of Proverbs so that we can retrieve it quickly and to study it with greater scope and depth.

I have done once with Righteousness in The Righteous - Wisdom from Proverbs.

Here is one study on Cause and Effect, or the Law of Harvests- Sowing and Reaping.

Just in case some Christians think that Proverbs is OT and not NT and hence is not relevant to them, I include the NT references on the same subject.

Here is the mind-map: 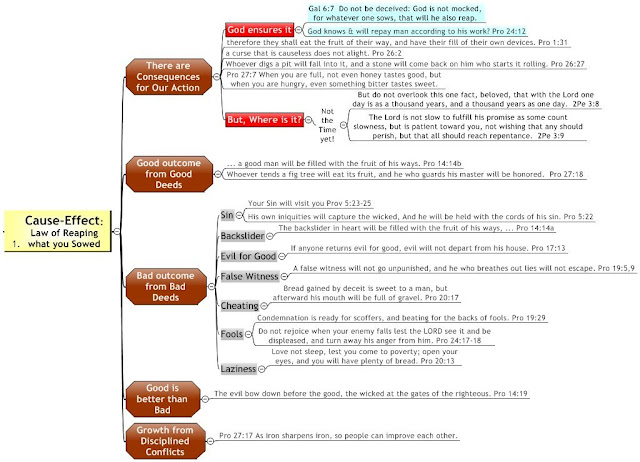 God Ensures It works!
There is no running away from this --- the consequences will our actions will catch up with us, because God is the one making sure it will happen. Gal 6:7. Some people think that they can get away with it. Some people mocked that God has fallen asleep since so far they have gotten away with it. They are to read 2Pet 3:8-9. God has all the time to do it and He is kind and just waiting for us to repent.
You Get What you Sow in Multiplied Effect
Chinese saying "好心有好报, 恶心有恶报", Good heart is rewarded with good and evil heart is rewarded with evil, matches well with the teaching from Proverbs.
Chinese have another related saying on Sowing and Reaping, "种瓜得瓜,种豆得豆", Sow melon reap melon, sow beans reap beans. You don't reap beans by sowing melon and vice versa.
It is Much Much Better to Sow Goodness than Badness
In the end, Goodness is better than evil.
Growth comes from Disciplined Conflicts or Managed Tensions
I shall end this "Cause and Effect" from the typical discussion of "good and evil" as above with a positive note. It is in Pro 27:27 As iron sharpens iron, so people can improve each other. In other words, growth comes from disciplined conflicts among people, or as Andy Stanley taught in Managing Tensions. Peace is not lack of action but a dynamic balance of forces. It is a bird singing next to a waterfall. Peace is not everyone the same but a harmonious appreciation of differences. Differences worked out make for growth and better relationship. Differences ignored or covered up will just result in superficial peace on the outside and stress inside, waiting for the 'last straw' to explode.
God's Forgiving Mercy does not Remove the Consequences.
Many believers think that God's forgiving grace (more accurately, mercy. See "Grace is Unmerited Favor" - This Common Definition is Wrong), removes the consequences from one's actions when one repented. They said that Jesus has fully paid for the penalty of our sins and hence we shall not suffer the penalty for our sins. That is true in the spiritual sense. We have our eternal life through Jesus that we could not by our own effort obtain it. However, we still have this physical life here on earth where we could do something, no matter how little, about our actions. The murderer may receive Jesus Christ as savior but he suffered the penalty of his act, some with death penalty and some with long term imprisonment. They are saved in Christ but they bear the consequence of their act. King David, while repented and forgiven, suffered the consequences of his sinful acts, death of baby, rebellion of his sons, sinful acts of his children etc.
The Book of Hebrew tells us that a loving Father discipline his children. If parents just remove the consequences of the actions of his children, the children will grow up to be abnormal and ill-adapted to the society. If you find spoiled braids, you will know that their parents had under the misguided understanding of love, remove the consequences of their actions.
God's love does not violate His own Words to us, otherwise, He become unfaithful and untrustworthy! 2Ti_2:13  if we are faithless, he remains faithful-- for he cannot deny himself.
Please don't be kinder than God.
God's love accepts us as we are but God's love also could allow us to be as we are and God gives us the grace to grow up to become what we should be.
See also Law of Harvests- Sowing and Reaping
Lim Liat (c) 13 Oct 2011.
Posted by Lim Liat at 11:34 am