Perhaps "Familiarity breeds contempt" also happens in Christian community that brothers or sisters in Christ are most critical of one another. There is the tendency to compare and despise one another. Such work of pride and insecurity happen most in the grey areas where right and wrong are not clearly stated in the commandments. There will be much quarrels about who is right or wrong. Such one-up-man-ship behavior is discussed in this Roman Chapter 14 resulting in guidelines for us to follow. Key points are: Firstly, to make a correct judgement, one must discover the inner intention and conviction. Secondly, I will restrict my freedom so that I may not stumble others.

Difference between the Weak and Mature
Paul covered the differences between the weaker and more mature brothers. The weak in faith still goes but external behavior to differentiate right or wrong. The mature in faith goes by the principles and the truth. They enjoy greater liberty. All food is clean and every day is a good day given by God and we shall all rejoice in them. However, the weak is stained by his past experience of certain foods and days are separated out as good or bad and hence are restricted. Nevertheless, their intention to honor God is right and good even though they are restricted by erroneous thinking. Their abstinence is honorable.

Key is Despise Not One Another and Build One another Up
The key for behavior is then not to despise one another because of their practices (to eat or not to eat) but rather try to build one another up. Don't waste time in quarreling.

Cannot be Forced to Do or Not to Do
Even when one know the intention, we cannot insist that weaker adopt the conviction of the mature. If they are not fully convinced and then act on it, his conscience will pricked and it is a sin. Paul said that whatever does not proceed from faith is sin. Let the weaker in faith grow up in time.

Let Not the Freedom of the Mature become the stumbling block for the Weaker
Everything is clean but it is unclean for anyone who thinks it is unclean. So, let not the Freedom of the mature (everything is clean) cause the weak (some thing is unclean) to eat the thing that he thinks is unclean and thereby falls into sin. The mature must always watch out that their 'good' and 'ok' behavior may in fact stumbles others. Consider drinking alcohol. Drinking is not forbidden in the Bible but drunkenness is sin. If we have a friend that was a former alcoholic, it is very important that we don't drink in front of him. By drinking in front of him is actually a temptation for him to start drinking, a problem that he may not be able to handle, the very problem that he became an alcoholic before. So, because the need of our brother, we will forgo the right to drink.

The above and other points are covered in the mind-map below: 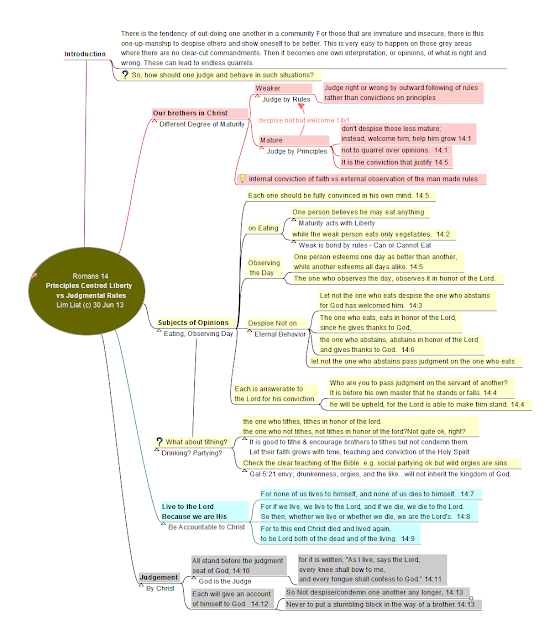 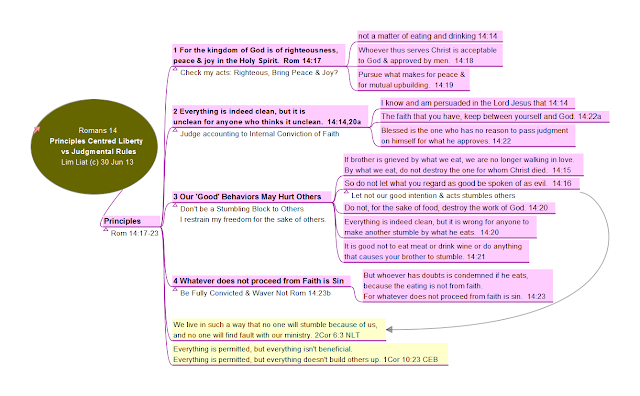 It is best summed up in by Paul in his other letters:

1 Cor 10:23 Everything is permitted but everything isn't beneficial and does not build one another up. Let the mature not used their freedom to cause the weaker brothers to fall.